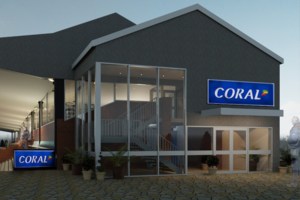 Opening Night…
It’s finally ready (almost). After a long wait, the new £10 million stadium is set to re-open next week. I’ll be getting an early preview on Champion Stakes Semi Finals night from the Pavillion Restaurant but will try to put up some pics for the evening so follow me on twitter (@greyhoundblogs).

Jackpot up for grabs…
Worth also noting that Colossus Bets has a £15,000 Jackpot for anyone that can pick 8 winners tonight. Ive covered some of the races so why not perm them up… You could even create your own syndicate and let others join. Jackpot starts at 18:27, Placepot (£2000) starts at 19:03.

Ok, for the racing…
6.27 – Tricky race to open the card, lots of unknowns – the biggest being how will likely Fav (T3) take to the track. A Hove and Central Park sprinter, this lightly raced type will need to be on its’ toes around here but if breaking well enough could get favourite backers off to a start!

6.44 – Another Puppy Open! Traps 1-5 are all going to be looking for the rails early here which could give “Buggy” in T6 a solo out wide. He will have to break well still but 5 could clear him an early path and may be included in a saver RFC.

7.03 – This race all rests on the break. Giselbertus was beaten in a trial midweek but could perhaps be forgiven a slow start for his 1st look back on a flipped track in a few months. If showing the customary electric early and beating 3 to the bend then it could be all over. If not, the early pace will come from all around and 3,5 or 6 could hit the lids if on song. A tricky race but one to watch nevertheless!

7.17 – If Miss Blackbell (T1) can get loose early again she will be sure to recoup any losses from last week. When racing for a 4-timer she was badly crowded when leading on the inside seeing her shuffled backwards. With a little less pressure on the inside tonight all roads should lead to the winning line where she appears to have a little in hand here.

7.33 – Droopys Fisher (T3) would’ve loved a draw nearer to the rails however with a lack of pace early he could still cut accross early and make his bid for glory. If doing so, he’s set for a battle with 6 – at the forecast prices I’d be with the white jacket.

7.49 – The 950m invitational and I can’t stay away from my old fave Aayamza Breeze (T1). She looks set tonight for a solo run from last to first with Middle and Wide seeds as her company. As always, she’ll need luck in running and there will be plenty of layers out to get her with her running style not necessarily suited to this right track but she is a class bitch. T3 will also be flying at the death but it will be harder to pick the path here! (Good luck Lorraine – fingers and toes crossed)

8.06 – Badminton Donal absolutely flew out of the traps when I went to watch the trials last week. Straight into a maiden open and if breaking like that again, he could rout these with a sub 24 second trial on the card. Short price for a first race under the lights but seems one to stay onside with!

8.21 – Trap 3 will have to break well but if doing so can lead the inside. If doing so I can see him holding on for the win. A very tough race however and the battle for the early lead is likely to cause some bother!

8.38 – Sporting Dave (T2) looks set to clear these early and power to victory. This should also tee it up nicely for T1 to get a clear and would be my FC play!

8.53 – If Antigua Vows (T1) can hold them all to the bend then this bitch should land the hat trick. Tough doing so with 3 a likely early contender but at forecast prices it should be a play.

LAY LAY LAY
9.08 – Brigadier Bullet would be my lay of the night at forecast 6/4. This dog has so much potential however rarely shows it. Without a win in his last 11 races I’m against this one tonight.